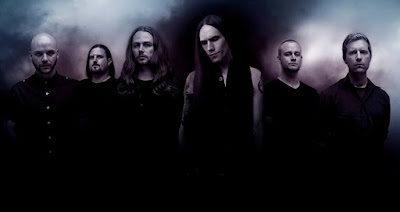 How is the expectation for the release of the new album 'Urn’?
Expectations are high for Urn, we put a lot of pressure on ourselves to create in a more focused timeframe, and I think we worked a lot better because of it…hopefully it comes across that way. I guess the expectations from whether people will like the complete album is always something in the back of our minds, though we are somewhat confident it will be well-received overall. We write for ourselves, and if we all like it, considering we’re all broad in what we like, then there’s a good chance the album will do well. How well? We don’t know.

You recently released a beautiful video for the single "Intra Venus". Was it difficult to choose a song to be the first single?
Thank you for the kind words, glad you enjoyed it. It was easier for it to be a single as it was the shortest song and is probably the most accessible out of our songs. I think it shows a good range of what we do, in a more condensed way.

In 2014 the band did a very successful crowdfunding campaign for a world tour. How did this idea come about?
As you know, being in a metal band isn’t very lucrative, so we needed to work out a way to raise money so that we could tour internationally, and a crowdfunding campaign was probably the only way possible in a shorter amount of time. We weren’t sure as to how it would go as we hadn’t done anything like it before, but in the end it was far beyond our expectations, I showed us that people care about what we do.

You've done a barbecue with an acoustic show and were even hosted by fans while on tour. How was that? And how is it to have such a close relationship with the fans?
The barbecue was a great experience for the band, as you mentioned we played an acoustic set, without me though...would’ve been a little weird involving me musically I think. We wanted to show our Patreon supporters/fans how much we appreciated them and so thought we’d do something personal and different to a normal metal show. The relationship we have with our fans is important, and that’s how it’s always been from our early days…fans are why we’re where we are today, without them and their support we’d probably just being playing the same small clubs when we started.

Being closer to the fans is a really cool thing, but at the same time it can be tiring to be nice all the time …
Absolutely, one thing that most people don't understand is that we give ourselves over every night on tour...and it's especially difficult for Tim and myself. We may sing for 90mins, and then talk to fans afterwards for a couple of hours, it's humbling but unless you're a singer, you don't realise how much of a toll it takes. We appreciate our fans more than they realise but it's hard to find a balance without being rude and preserving our voices, over spending quality time with people to let them know we appreciate them turning up. On top of that, I'm not the most sociable or extroverted person either, and so being in public is difficult enough for me regardless of circumstances.

Your lyrics are full of metaphors and visual references. Where does your inspiration come from?
I write as if describing moving paintings, at least how that's how I see it, not sure how others perceive it though. My inspiration comes from many places; primarily old art from the Renaissance period through to Romanticism, and I do reference certain paintings to get a certain thought across. Also, I'm inspired by literature, old and obscure books on history and mythology. Everything I write has a purpose and a place, my thoughts are heavy handed and so I like other people to explore meanings for themselves.

Most of Ne Obliviscaris songs go beyond ten minutes. Is this purposeful?
Definitely not purposeful, we don't sit down and plan to write by length, only until the song feels right. If you write for a specific length or superficial reason, generally it's going to be either terrible or dishonest to what you stand for.

How is the process of composing a new song? Are there many discussions between the members?
There’s always discussions between everyone in the band, it needs to be a group effort otherwise it would become stagnant and boring. Generally different members will come forward with a riff or section of a song they’ve written, and we’ll tear it apart, reconstruct it and/or develop the idea further. Each song tends to be different so there’s never really a conscious and specific way we write.

Generally who gives the final word on the compositions?
We all agree on the composition..when you're in a band you need to understand the concept of compromise, otherwise the band will be short-lived. We address everyone's concerns throughout the process, and so therefore towards the end of the writing process we don't have surprise disagreements...it's logical, but I know bands that have broken up because of not being conscious of such things.

You have another project called Antiqva. What can you tell us about it?
In short, it's orchestral black metal. We're currently in the process of writing material for our debut release, don't expect it in 2017 though as it's quite an undertaking, but we're all from established and professional bands so we know what commitment is required. The sound we're developing is quite special and sounds nothing like any of our current projects...the sound is quite fresh (for lack of a better word) yet it has an older sensibility.

Australia has revealed great bands like Voyager and many others. What can you tell us about your scene?
The Australian scene is thriving, quite a few new upcoming bands and also older bands that don't and haven't had a lot of exposure internationally. One of the main issues is that our country is so far away and therefore even if there was the opportunity for bands to tour, the expense is too high already, and so many bands just won't get heard or seen. Australian bands do it tough, and I think their work ethic really comes across when they do eventually get to foreign shores.

What do you know about the brazilian metal scene?
To be honest, my knowledge of Brazilian metal is very limited, the bands off the top of my head I can think of: Sepultura, Krisiun, Sarcófago, Angra, Tuatha de Danann, Spell Forest, Mythological Cold Towers, Thy Light, and Patria…and I don’t know what the scene is like there, but from an outsider’s perspective, the scene is huge from what I’ve gathered online...we get asked almost everyday when we're going to tour there.

Here is the link of five Brazilian bands. I would like you to listen carefully and comment your impressions on each of them, ok? Be honest!

I’d known of them however had never really gotten a chance to check them out. It’s very heroic and raw sounding, reminds me a lot of a less polished Bal-Sagoth, I’d probably have to listen to their other tracks to get a better idea.

I'm already aware them, heard them many years ago. A very interesting, energetic and creative band, a little too uplifting for me though. Anyone that listens to folk metal, would appreciate a lot of elements in their music.

* Thy Light - “The Bridge”
I already know and like this band, very atmospheric a depressing music

* Arandu Arakuaa - “Ĩpredu” (PS: They sing in 'Tupi Guarani", a language of the brazilian indians)
I’m very confused about this one…not really sure what to say, but for me it seems like there’s too many elements; Metal, folk, pop, tribal. It’s certainly creative I’ll give them that.

* Miasthenia - "Entronizados na Morte" (PS: They sing in Portuguese)
This was good, very mid 90’s symphonic black metal, reminded me of a mix between mid era Dimmu Borgir and early Catamenia, but with less focus on keys...would probably check out their other music.

Are there any chances to come to Brazil on the next tour?
We'd love to make it to Brazil, definitely something we've been wanting to do for a while. Not entirely sure what our fan base is like there, but as I mentioned earlier it seems we have a growing audience, we'll see. Any promoters out there are certainly encouraged to contact us. 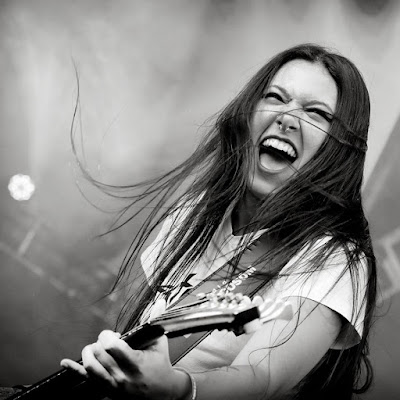 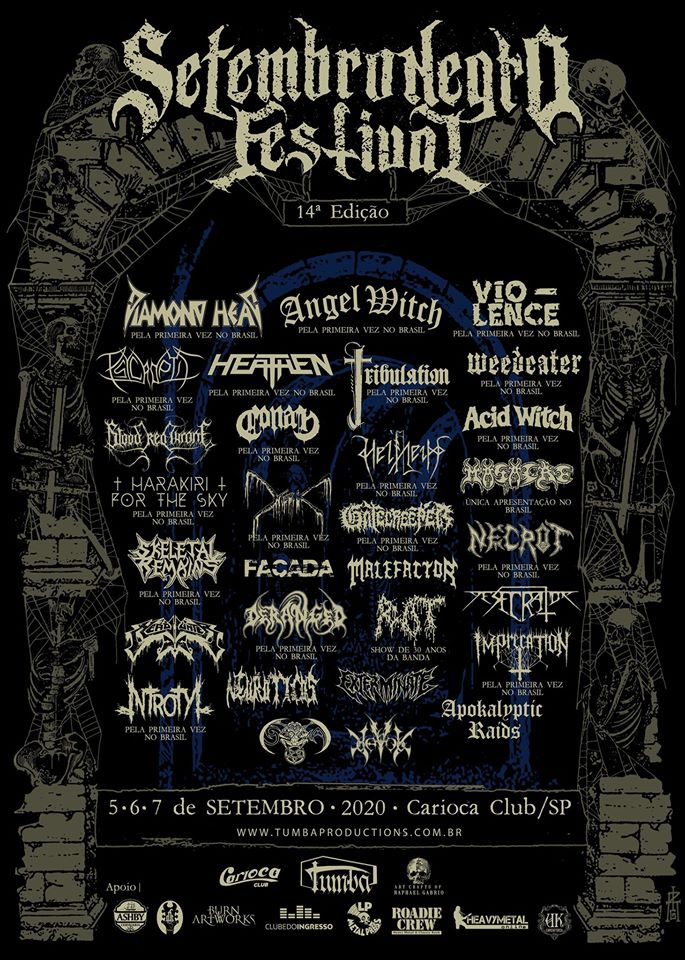 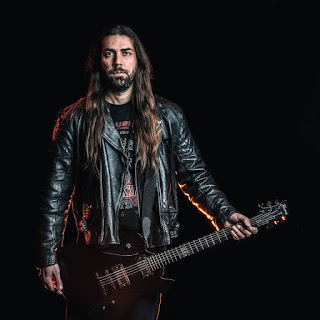 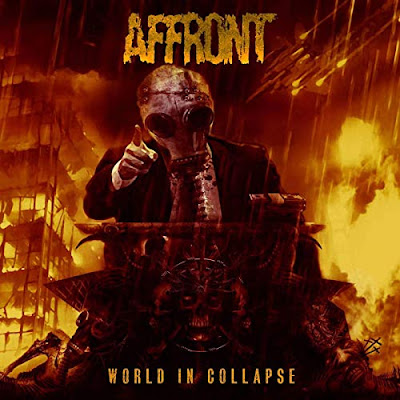 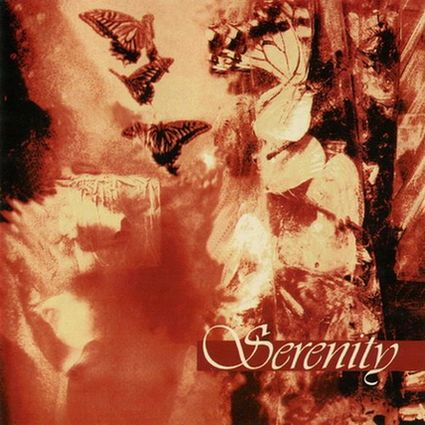 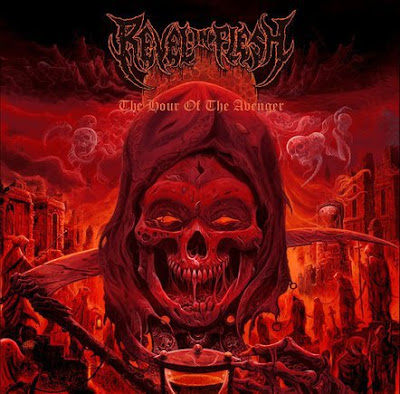 REVEL IN FLESH - The Hour Of The Avenger 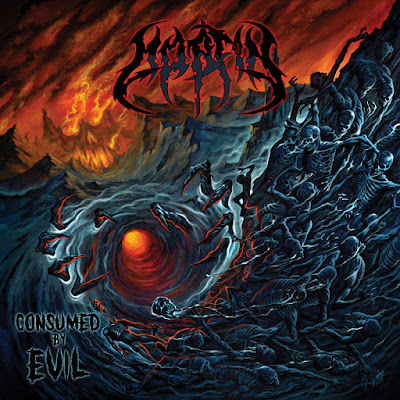 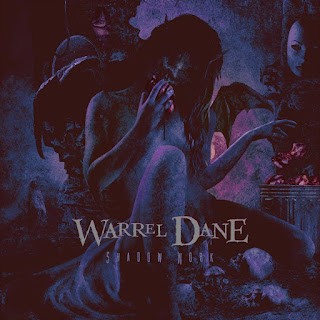 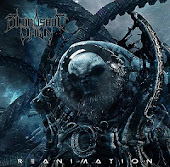 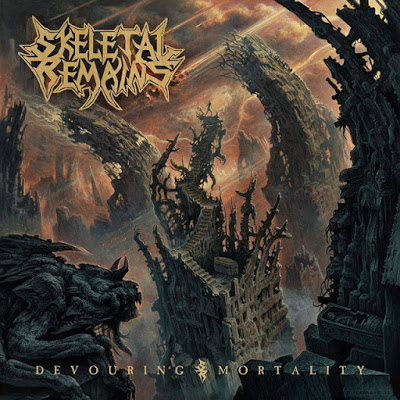 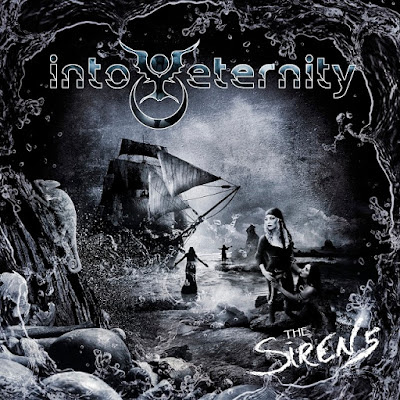 INTO ETERNITY - "The Sirens"